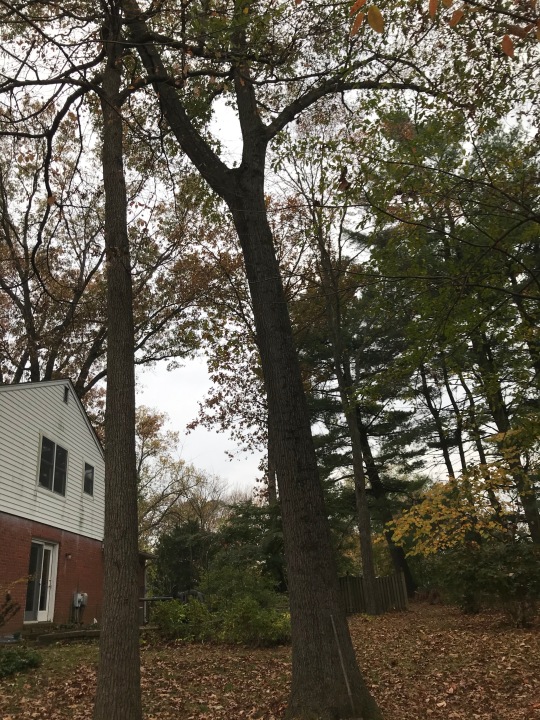 It’s early November in central Maryland and some classic fall weather arrived with the turning back of the clocks last Saturday night. The clear, crisp days this week were perfect for my ongoing efforts to deal with the abundance of fallen leaves on our half-acre suburban property. Our lot has more than a dozen tall hardwood trees – mostly oaks, with a few maples, wild cherries, and hickories. A hard rain over the weekend brought down a plethora of leaves, with many more still clinging to overhead branches.

In the early stages of autumn leaf-fall I use my lawn mower to simply shred them where they lie. This has become “best practice” for many environment-minded suburban property owners. The finely shredded leaves are further broken down by the fall rains and become a useful soil nutrient.

As the season progresses and the lawn gets saturated with leaf residue, other strategies are needed. Some people rake the leaves and place them in large, special-purpose paper bags for curbside pickup. I’ve done this in the past, but my 70-year-old lower back now prevents me from doing so. Instead, I often rake the leaves onto large tarps and drag them to the back of my yard where I use the mower to mulch them in piles. After a year or two, the resulting leaf mulch becomes a useful soil additive for my gardens and planting beds. We were travelling a lot last fall, so I resorted in the late stages to hiring a contracting crew to blow the remaining leaves to curbside for removal to our nearby dump/recycling center.

I was finishing a morning of mower-mulching in place today when an older neighbor-friend came by to say hello. We shared strategies for leaf removal and also talked about hiring lawn treatment companies for next year. As we were talking, a younger man arrived and approached us. Serendipitously, he was the new site-inspector for the lawncare company I had contracted with this past year, Save-A-Lawn. He introduced himself as Ryan, apologized for the interruption, and said he only wanted to inspect the state of my lawn before drawing up a proposed contract renewal. We both agreed that the lawn had benefitted from the bi-monthly fertilizing and “hybrid-organic” weed and pesticide treatments. The full lawn aeration and over-seeding done in September had resulted in a filling-in of many bare spots as well.

After his inspection, Ryan proceeded to tell us that a recent court decision, sustaining our county’s anti-chemical strictures on lawn treatment, was now in full force and was dramatically affecting the entire lawncare industry in Montgomery County, MD. No chemical pesticides or herbicides would be allowed for lawn treatment next year. Ryan reminded me that I already had a “hybrid-organic” treatment in effect, but that the requirement for 100% organic treatment was a major challenge to implement. He was confident that his company would be able to fulfill the new law, but he wondered about the large-scale companies like Tru-Green and Chem-Lawn who currently had no organic alternatives within their chemical-driven offerings.

I count myself as a political and environmental activist and was chagrined at my ignorance of what had transpired with the lawn-care “cosmetic chemical” ban. I’d been motivated to upgrade my mostly raggedy lawn last year after starting to consider selling our “empty nest” 4-bedroom home. My wife and I take frequent walks around our neighborhood and were keenly aware that the appearance of our own lawn was not up to neighborhood standards. We didn’t want to go over to the full chemical pesticide/herbicide approach, but we did want to upgrade our lawn’s appearance. We were happy to have found a smaller lawncare company that offered some organic alternatives.

The Web made it easy for me to get up to speed about what had transpired. Our local lawncare chemical ban was actually passed by the Montgomery County Council in 2015. We were the first major jurisdiction in the country to have passed such a ban. The measure targeted certain chemicals that have federal approval, but which contain substances linked to cancer. The law exempted agricultural land and golf courses and didn’t actually ban the sale of the chemicals within the county. Upon its 6-3 vote passage, the measure was immediately challenged in court by a group of lawn-care companies, a trade association, and some private citizens.

In 2017, a county Circuit Court judge agreed with the plaintiffs, concluding that the county measure was preempted by state law. A Maryland Court of Special Appeals overruled that decision in May 2019, opening the doors for county enforcement of the chemical ban for “cosmetic” lawncare use. The measure had the strong support of the county Sierra Club chapter as well as a large number of local environmental activists and Councilmembers.

The opposing trade association lamented the state court’s ruling and promised to consider other options for possible appeal. The state judge’s ruling simply asserted that localities had the authority to create regulations on potentially harmful chemical products. His ruling states:

“We conclude that the citizens of Montgomery County are not powerless to restrict the use of certain toxins that have long been recognized as ‘economic poisons’ and which pose risks to the public health and environment.”

I for one am fully supportive of our county’s lawn-care chemical ban, despite its radical effects on the lawn-care industry and on the pristine state of suburban lawns. Ryan told me that his company’s need to find fully organic fertilizers would likely mean an immediate price increase for next year’s lawn care service. That’s a price I’m happy to pay.