My wife and I just returned from a marvelous 10-day vacation in the Colorado Rockies.  My youngest sister, Meg, a longtime Denver resident, arranged the trip for us and three other siblings and significant others.  Meg is the only westerner among the ten of us Buffalo-born sibs and she really enjoys showing off the splendors of the mountains to her East Coast family and friends.

Our 4-hour, early morning flight to Denver was uneventful. But while waiting for our rental car at Denver airport, we met another retired couple who lived just a mile from us in Rockville, MD.  It was fun sharing travel plans and celebrating the serendipity of our encounter.  This would be the first of three chance encounters that added spice to our trip. 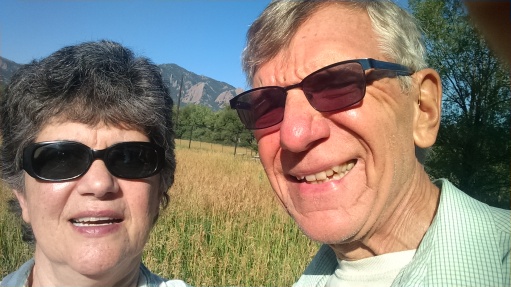 Our first stop was the Denver home of one of Andrea’s old Oberlin college chums.  We successfully navigated a missed exit on the freeway to arrive at Debbie’s lovely home in southeast Denver. Debbie is an active retiree but made time to prepare a delicious pizza and salad for us.  She also took us on a short walk of her neighborhood, allowing us to begin taking in the decidedly different flora and landscape.  We became aware of the mile-high elevation as we quickly tired in the thinner air.  Our only regret was that we couldn’t visit longer.  Andrea had booked concert tickets for us that evening in nearby Boulder and we were eager to check into our hotel there and get settled before our night out.

A Day-and-a-Half in Boulder

The 45-minute drive to Boulder gave us our first glimpses of real mountains. We’d also heard a lot about Boulder as a cultural and educational mecca and were eager to have a day-and-a-half there to explore.  After checking into “The Broker Inn” and resting, we dressed for our evening concert at the Chautauqua Auditorium, about two miles down the road.  It was one of the last classical concerts of the annual Colorado Music Festival, and featured Beethoven’s well-known Pastoral Symphony (#6) and a violin concerto by Phillip Glass.  Andrea had communicated with two old friends of ours who had moved from the DC area back to Boulder some years ago.  They actually lived within the Chautauqua community in Boulder and had alerted Andrea to the concert.

The auditorium was a cozy 19th century barn-like structure located on the sprawling campus of the Chautauqua community.  We were happy to find street parking about a half-mile away and settled in for a first-rate performance, introduced and conducted masterfully by the Canadian musician Peter Oundjian.  Beethoven’s 6th symphony is a beautiful and lively evocation of the natural world and includes a famous depiction of a gathering thunderstorm.  Shortly after the piece came to an end, a hard, steady rain began to fall outside, curtailing our intermission excursion.

The ensuing concerto was deeply evocative and stirring, played by the accomplished violinist Robert McDuff.  The stated theme of the concert was minimalism in music.  The composer Phillip Glass is a master of using simple repeated chords and phrasings to build music of substantial depth and lyricism.  Mr. Oundjian had provided some background about the piece, dedicated to Glass’ father, a man unlettered in musical complexity.  We enthusiastically joined the standing ovation for the masterful performance of this modern piece that uncharacteristically communicated great depth of feeling.  The expanded feeling of the concert helped us to navigate the steady rain falling on us as we walked back to our car.  Soaked but happy, we found a fast-food restaurant on the way back to our hotel where we could dry off and eat a very late supper.

We slept well that night and got up to the hotel’s full breakfast offering in an ornate old dining room overlooking one of the University of Colorado’s sprawling campuses.  Our ensuing drive to the downtown area took us past further expanses of this impressive public university.  With limited time we had to forego a tour of the university in favor of visiting the old historic area of Boulder.  We parked and walked to the tourist-friendly pedestrian mall along Pearl Street.  It reminded us of a similar car-free area in downtown Charlottesville, VA where we had recently visited.

It soon became clear that the increased elevation of Boulder was taking a toll on both of us.  We had to stop regularly to sit and rest on the benches and in a coffee shop along the Pearl Street mall.  A highlight of our morning was visiting the exquisite Rembrandt Yard Gallery, a glass-walled building with wonderful views of the downtown area and surrounding mountains.  The gallery was featuring an exhibit of original Maori paintings.  The natural light-filled ambience of the gallery, including a sound system playing late-Beatles, psychedelic music, transported me to a relaxed, expanded state of awareness in which the “primitive” paintings communicated profound, universal messages. 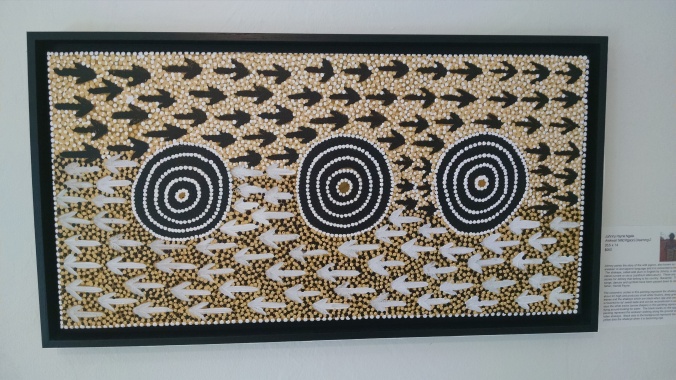 On the walk back to our car, we stopped to buy just-made quesadillas from a Mexican American food truck.  They were delicious and substantial, impressing on us the pervading Hispanic cultural presence all around us.

After a refreshing dip in our hotel’s small outdoor pool, we rested for a while before going out for dinner at our old friends’ home back at the Chautauqua.  Rob and Alice are Boulder natives who were happy to “retire” to their hometown after successful careers in the DC area.  We had gotten to know them more deeply after spending three weeks together on an extended retreat in Brazil four years ago. They warmly received us in their renovated “cottage” located next to a hiking path up to the “Flatirons”, Boulder’s highest ascent.

It was a wonderful evening sitting out in their back patio for a delicious supper.  Their mid-twenties daughter, Naomi, was visiting and it was good catching up with her as well.  She and our son had been classmates at the Washington Waldorf School for a few years.  As with many good friendships, we were able to pick up the conversation from where we’d left off.  Rob and Alice have similar cultural and spiritual interests in addition to shared friends and history.  How rich for us to arrive in a new place and feel so known and taken in!

After a post-breakfast stroll through the Univ. of Colorado campus across the street from our hotel, we loaded our rental car for the 90-minute drive up into the mountains.  The city of Boulder quickly gave way to bare, brown hillsides and longer and steeper ascents on Route 36.  Driving the 2-lane road became challenging when we encountered the bicycle leg of an “Iron Man” triathlon, with spread-out riders hugging the shoulder.  We were mightily impressed at the riders’ stamina on the long ascents in the thinning atmosphere.  There was a bona-fide traffic jam on arriving at the town of Lyons, but the cyclists diverged there, and we were soon moving again.  As we continued to ascend, occasional mountain vistas began opening up.  About ten miles from our destination in Estes Park, we got a good look at some snow-covered peaks.  As we pulled into our modest motel-resort on the outskirts of town, the Rockies presented themselves in all their raw majesty.

We arrived around noon.  Our room wasn’t ready, but the warm, welcoming desk woman suggested a short drive down to the town’s visitor center where we could park and explore the town by foot.  The visitor’s center proved to be a hive of activity as it was the embarkation point for hikers waiting for buses into the nearby Rocky Mountain National Park (RMNP).  The impressive Big Thompson River ran behind the visitor’s center with crashing whitewater rapids.  We joined a small stream of other visitors for a stroll along the town’s famous “Riverwalk”.  The half-mile-long walkway is a landscape architect’s paradise, with benches and rocky inlets and sculptures and cleverly designed children’s play areas along the riverfront.  The opposite side of the walkway faces the rear entrances of a stream of up-scale coffee shops, restaurants, and gift shops.  We had a nice stroll, stopping to take photos and appreciate the wonderful zen-like atmosphere.  At 7500 feet, we also noticed our growing fatigue and made stops for coffee and lunch before heading back.

Our room was almost ready on our return and we took some time to explore the comfortable grounds, which included a large outdoor swimming pool and adjoining, enclosed hot tub.  This was clearly a family-oriented resort, with open playgrounds and green space and lots of kids in the pool.  It was laid out as a quadrangle of traditional one-story motel units around a large central green space.  In addition, we were just a stone’s throw from the picturesque Lake Estes. We were happy with our spacious digs that included a front sitting room, comfortable king size bed, and rear dining area with table and chairs, small refrigerator, microwave, and adequate bathroom.  This was our home for the week and we were quite pleased with it.