I’ve been appreciating a vigorous leafy plant that emerges from the boggy soils of a nearby wetland/forest each spring, often as early as February.  Its purplish-green flower sometimes even pushes its way up through snow.  I’ve learned that the plant has a thermogenic property, emitting warm gases that enable it to thaw the frozen ground enough for its stalk to emerge.

The plant’s botanical name is Symplocarpus Foetidus.  The “Foetidus” part describes an alleged fetid smell emitted by the leaves, hence the common name, “skunk cabbage”.  But truth be known, I’ve not been able to smell anything fetid or “skunkish” despite numerous attempts to elicit it by grinding the leaves or even bending down with my nose fully immersed in it.  So for me, it’s simply “swamp cabbage”.

I’m someone who suffers a bit of “Seasonal Affective Disorder” (SAD) during the long winter months here in the Mid-Atlantic.  First spottings of the emerging stalk of this plant help to lift me out of my winter doldrums, reassuring me that spring is on the way.  Regular re-inspections reveal a vibrantly green organism enclosing the purplish flower. (The plant is botanically regarded as a wildflower). 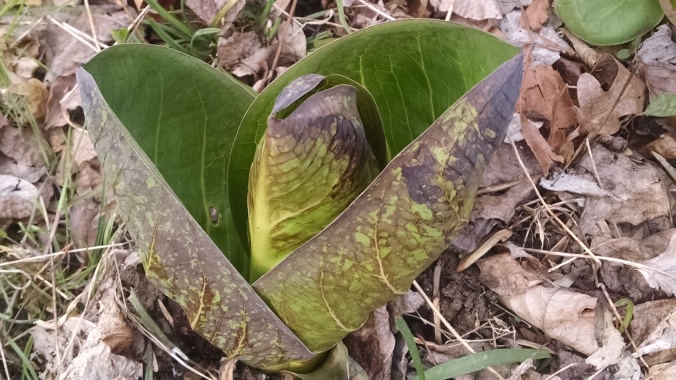 Another element that inspires me about skunk cabbage is its profligacy.  Some grow directly from seed but many of them emerge from a thick rhizome – a common root which extended families and clans of the plants share.  Initial groupings of three or four can multiply over time into dozens of related plants within a few square feet of one another. 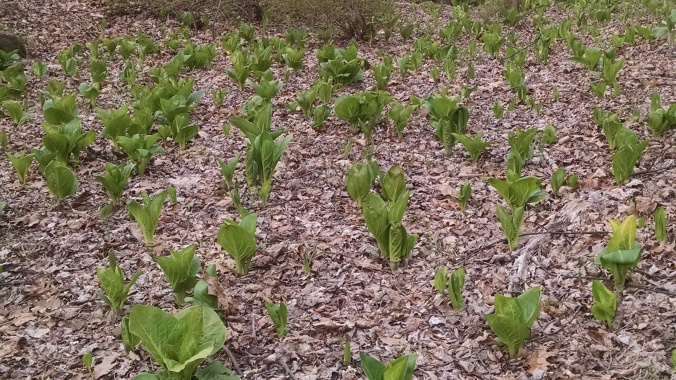 Swamp cabbage has an extensive and brawny root structure.  They grow in marshy soil and along stream banks and help to stabilize muddy soil.  They like partial sun and can propagate extensively.

A naturalist friend recommended a book by the brilliant contemporary plant-healer, Stephen Harrod Buhner. “The Secret Teachings of Plants” has a section in which the author describes the process of harvesting a swamp cabbage for the well-known medicinal power of its roots (used for asthma and other respiratory ailments).  I followed his instructions when I tried to replant a swamp cabbage in my garden a few years ago, without much success.  Digging out the plant from its muddy soil takes persistence and a willingness to get “down and dirty”.  The plant’s roots noticeably retract when you try pulling up on the stalk.  Skunk cabbage is a model of a well-rooted organism that fiercely guards any attempt to remove it.

Stephen Buhner describes the ancient heritage of this plant, with fossil records dating them back millions of years:

“The plant and flower are …throwback to a time when dinosaurs ruled the land.  There is a silence which reigns where skunk cabbage grows.  The mind quiets as it nears the plant, becoming more silent than even the stillness coming from the forest that surrounds you.  You approach it slowly, reverently, and kneel at its side, the muddy, watery soil soaking through the knees of your pants.”

By mid-April the plant’s leaves extend out for up to 18 inches and take on the appearance of edible cabbage.  The leaves are edible only after they’ve been dried.

The vigor and the profligacy of swamp cabbage inspires in me a feeling of vibrant health and rooted well-being.  The plant is a model of sustainability, continuing to make its mark on planet Earth through the course of multiple geologic ages.  I’m left with feelings of awe and appreciation each spring when the swamp cabbage returns, pulling me out of the muck of winter’s gloom and opening my spirit to new possibilities of growth and connection.